HC Melbourne’s Women continued their undefeated run in the inaugural Hockey One season over the weekend.

Round 3 of the competition was a valiant performance from Hockey Club Melbourne as they took on Canberra Chill under the Friday night lights. HC Melbourne’s women’s team took a 2-0 win in the opening game to continue their undefeated streak, while the men made the record books defeating Canberra Chill 10-5. 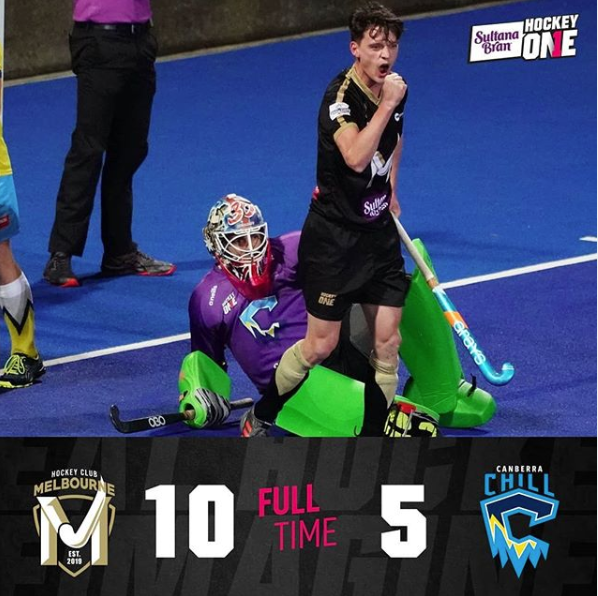 In what was a fiery contest at the State Netball and Hockey Centre, fans certainly got their money’s worth with a whopping 17 goals scored.  The women’s game was first up with both teams finding their passages of play in the opening term. With both Anna Moore and Nikki Bosman on debuts, they quickly found their rhythm and the team play started to link up through the field.

It wasn’t until everybody thought the first half was over, Olivia Colasurdo sent a strong ball into the attacking circle finding Madi Ratcliffe in the dying seconds. However Ratcliffe wasn’t able to score of the conversion.

Early in the third term HC Melbourne earned a short corner from a sloppy Anna Flanagan tackle outside the circle. Flo Van Grimbergen sent a strong slap in and Hannah Gravenall finished off a well-drilled corner to give HC Melbourne a 2-0 lead over Canberra Chill.

The last term saw both teams’ present opportunities but none found the back of the net.

The men followed shortly after with Canberra Chill looking defiant in the early stages. Daniel Conroy caught HC Melbourne’s defenders off guard to earn a penalty corner in the first minute of play. A conventional corner was awarded and Johan Durst kept out the first ball, but the injector, Backhus made no mistake on the rebound and sent it into the top of the net to set the lead 0-1 to Canberra.

HC Melbourne settled quickly and started to set the tone, not long after Kiran Arunasalam ignited the team through some individual brilliance dribbling along the baseline through four players to find the back of the net to draw the score 1-1. Kiran couldn’t convert with a fantastic save from Andrew Charter but Kiran’s play opened the flood gates.

Kleinschmidt setup a great one-two passing play to finish the goal with an extended sliding tap 14th minute to lead 2-1. A minute later, first-gamer Craig Marais finished off an excellent penalty corner with a goal off the Charter’s pads to lead 3-1. Will Gilmour was next in line on the scoring sheet with a great assist from Arunasalam along the baseline. Gilmour nailed the conversion to put HC Melbourne in the lead 5-1. Then Arunasalam finished out the half by scoring and converting to give him a hat-trick and a 7-1 lead going into the major break.

The third term started with Will Gilmour finding the net once again and making no mistake of the conversion, stretching the lead further to 9-1 and totalling four goals for Gilmour. Kiran Arunasalam equalled Gilmour’s goals finding the net again in the 41st minute, giving Melbourne a 10-1 lead going into the last term.

Canberra Chill came out hard in the final term while HC Melbourne took their foot off the accelerator. Canberra’s Danie Conroy made the field goal and conversion in the 49th minute while Backhus made it three to his name with two goals in the final minutes. The game was all but done with a whopping 15 goal haul and HC Melbourne becoming the first team in the league to hit double figures.

In the second game of the double-header weekend, HC Melbourne took on NSW Pride on Sunday 20th October in Sydney.

The women’s game, a second quarter flurry of goals from HC Melbourne broke the hearts of the NSW Pride home-crowd and kept their unbeaten streak going.

Amy Lawton put HC Melbourne on the board early with a field goal but was unable to extend their lead after NSW Pride goal-keeper Jocelyn Bartram expertly dealt with her conversion attempt. Abigail Wilson pegged one back for the Pride two minutes into the second quarter with a fantastic finish from a short corner.

That was the end of the celebrations for the Pride though, as Aisling Utri and Claire Messent put three goals past them to send HC Melbourne into the break with a convincing 4-1 lead. Nicola Hammond extended the lead even further in the third quarter, before Messent and Madi Ratcliffe put the result beyond doubt in the fourth.

In the final minute of the game, Kate Jenner blasted a shot at goal which took a final touch off Casey Sablowski to drag back the score line slightly to 7-2 at the last whistle.

In the men’s game, a three goal-haul to Kurt Lovett, a brace from Blake Govers and diving field goal from Flynn Ogilvie were the highlights in the NSW Pride men’s 6-1 win over HC Melbourne.

An unfortunate deflection off HC Melbourne defender Connar Otterbach late in the first quarter gave the NSW Pride an early two goal advantage after Lovett stepped up and converted the initial goal. He put himself on the scoreboard yet again right before the half-time break after he capitalised on a goal-mouth scramble.

Govers extended the Pride’s lead to five goals in the third quarter after a scorching run along the baseline that was eventually deflected in off HC Melbourne keeper Johan Durst. The NSW win was put beyond doubt by Ogilvie halfway through the final term with a diving field goal in the circle. HC Melbourne captain Russell Ford claimed a consolation goal for his team in the dying minutes of the game to make the final score 6-1.