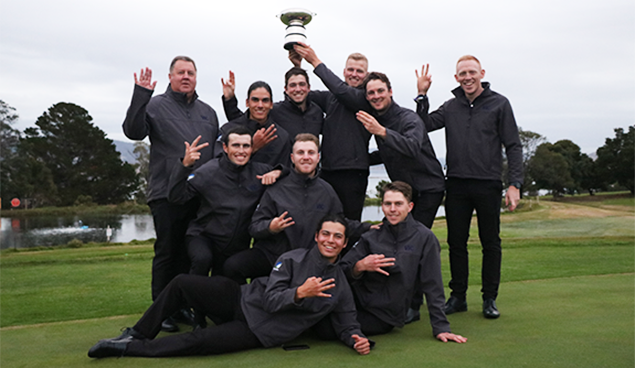 The Vics and arch rival New South Wales played each other to a tense 4-4 tie, but a deep-dive countback ensured the trophy would return to Melbourne.

New South Wales had entered the day with a seemingly comfortable lead on the round-robin ladder and a finals berth booked, with Victoria first needing to down Tasmania to even get a shot at defending its crown.

But with the focus on that contest, eventually won 4.5-2.5 by Victoria after another tight tussle, the turning point was happening “off Broadway”.

Western Australia flexed its muscle and crushed a relaxed NSW squad 5.5-1.5 – the exact scoreline that would leave the Blues and Vics knotted both on contests and individual matches won, the first two deciders of final ladder position.

By Interstate Series rules, the next determinant is how many matches were won by players at the No.1 position in each team through the round-robin matches and that fell Victoria’s way 3-2.5.

So by that most minuscule of margins, the Interstate Series was ultimately decided.

A thousand different permutations through the week could have generated a NSW victory with the final 4-4 scoreline, but that mattered not to the Victorians who celebrated on the 18th green when a gallant James Conran conceded the final hole to Darcy Brereton, whose 2-up win provided the pivotal fourth point for the defending champs.

“We understand it’s not a conventional way to win, but we finished on top and that’s all that matters,” Victorian captain Blake Collyer said.

“Even though it’s a different looking team to the previous two years, we’re really thrilled to make it three wins in a row for the state.

“We all carried the load at different stages during the week and we stood up when it counted most on a long and cold final day.

“Tasmania and New South Wales both pushed us hard, but we didn’t break.”

Collyer and the unbeaten Kyle Michel were the cornerstones of Victoria’s title run, but Brereton, a red-hot Andre Lautee and resurgent Matias Sanchez all provided key points in the final.

The final appeared to be headed north of the Murray when Jye Pickin and Lucas Higgins saluted in the first two matches on course.

Promising Harrison Crowe continued his unbeaten week when he gave NSW another point in the third match out, a tight one against Lukas Michel.

In the anchor match, joint NSW skipper Blake Windred put on a performance for the ages in downing Collyer 6&5, in a match featuring a couple of long-range Windred holeouts among some scintillating iron play.

Windred said he felt “like I was on Playstation” as he raced to six under through 13 holes to put his team on the brink of victory.

But Sanchez metaphorically stood tall against the towering Josh Armstrong to win on the 17th green, then ran up the last hole just in time to see Conran’s ball plugged in the greenside bunker – a cruel blow when the young Blue had won the 17th, had late momentum and needed to win the last to give his state the victory.

Brereton pitched his second to 1.5m, then watched as Conran firstly played a quality blast shot around the contours of the green to leave himself a long par putt, which then lipped out as it broke hard late.

When Conran couldn’t make the bogey putt, he took off his hat and extended his hand to Brereton in concession mode.

One quick shake later and the Vics were back in party mode for the fifth time in six years.

In addition to Kyle Michel and Harrison Crowe, Tasmanian veteran Craig Hancock was also awarded a medal for his achievement of going undefeated through the week.